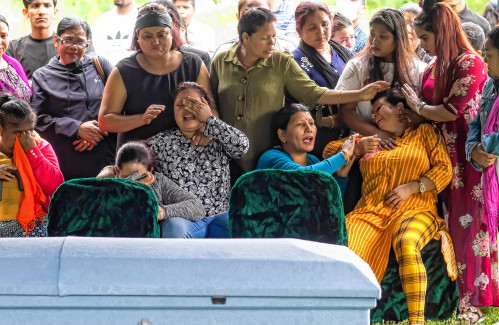 The Darjee family’s small apartment in Concord was packed with relatives on Friday morning, some cooking in the kitchen, others walking back and forth through the open hallway door littered with shoes. Rajesh Darjee was sitting with his father, Bir Bdr Darjee, on a long sofa at one end of the room.

A single air conditioner was humming in the corner, and the sound of video games could be heard in one of the bedrooms, where the younger ones were playing.

Some family members live nearby, others had come from out of state to support the family in times of mourning.

It had been a week since Concord High School alumnus Kiran Darjee and the second oldest in a family of six sons, died suddenly on July 2 when the car he was driving left Interstate 89 at Warner and had crashed. Kiran, 21, and his friend Raj Darjee, 18, were on their way to Vermont to pick up his girlfriend and return to New Hampshire, according to the family. Raj, the only passenger, survived the crash with injuries.

The death of Kiran Darjee shocked the Nepalese Bhutanese community of Concord, where he was well known to many. More than 150 people turned up for the funeral, which took place at Blossom Hill Cemetery on Thursday.

Ambikh Darjee, Kiran’s mother, was overcome with emotion during the services. A day later, she sat quietly on the floor on one side of the room, her back to the wall. According to Rajesh, she observed a 12-day mourning period for her son in accordance with her Hindu religion, when she sits and only sleeps on the floor, wears simple clothes and eats salt-free food which she cooks herself. even. The rest of the family, most of whom are Christians, mourned differently, through funerals and burials, and spent time together.

Kiran Darjee was a friendly and helpful young man, the family said, and as a single older brother he took care of “everything” around the house.

“He’s friendly, he couldn’t keep any bad things inside,” said his older brother Rajesh. “He talks openly with everyone and he loves the sport. “

Kiran enjoyed spending time with friends, playing soccer or volleyball in Keach Park, or fishing in the Merrimack River. He always had a group of friends and Rajesh said he would talk to anyone.

“When he saw people, he always spoke with them, regardless of the country or the language,” Rajesh said. “He always loved them and they loved him.”

Kiran, like his brothers, grew up in Nepal and arrived in Concord in November 2017, at the age of 17. He spoke minimal English when he arrived and Rajesh said he was surprised how quickly his brother improved just three months after starting school.

“I was like”, really? How could you do that? ‘ Rajesh said. “He learned quickly. It might help mom do it all.

“He was quite a good guy. He was so chatty and funny, ”Sharma said. “He was so active, he liked to talk a lot. He had a lot of friends.

Despite his many friendships, Kiran disliked school, according to Rajesh, and dropped out in 2020 against his older brother’s advice.

“I said, ‘Okay whatever you want but take care of mom and work,’” Rajesh said. “He said, ‘Okay.’ I don’t know what he thinks about his future, but he plans to work. He said: ‘I’m going to work, I’m going to do something better for my family.’ “

After leaving school, Kiran worked at Aissa Sweets on Hall Street with her cousin Prakash, a baklava maker. He later worked at Harvey Building Products in Manchester, which manufactures windows and doors. At home, Kiran helped his family by driving his mother around town. His little brother Bibas, 11, a fifth grader at Broken Ground School, said he enjoyed watching Indian movies with Kiran, who also gave him money to buy ice cream at Arnie’s Place.

Kiran’s uncle, Deepak Mothey, said Kiran was always ready to lend a hand when someone moved or needed a ride somewhere.

“He was a friendly, kind and helpful person. He’s helped me a lot, like in so many situations he’s helped me, ”Mothey said. “I still remember him and [he is] so missed by this sudden departure.

In Concord, Kiran was an active member of his religious community, FaithBridge Church in Manchester, which serves the Nepalese Bhutanese community.

“He was educated, plus he worked, but he was good at coming to church and he was very supportive of others,” said Richard Das, a pastor at Concord.

Kiran had a good voice and often sang during church services, according to his family. He loved listening to rap, especially music by Nepalese artist VTEN. He would perform rap songs himself and was working on a freestyle track he hoped to finish by the end of the year, according to Prakash.

Kiran also loved the traditional Nepalese dances he learned in school growing up and performed with his brothers at church and at the multicultural festival in Concord.

Last week was tough for the Darjees. With so many relatives occupying the apartment, Rajesh said police showed up at the door in response to a noise complaint. Since then, they have tried to keep noise to a minimum. In addition, Rajesh said he was upset by a hurtful online comment to his family about his brother’s death, which called people bearing his name “a threat to society.”

“He’s not a bad guy, he’s a nice guy. He’s a strong guy and he takes care of his family, ”Rajesh said of his brother. “Not all Darjee are of the same kind of mind. If somebody’s doing wrong, people with the same last name, they’re not doing the same sort of thing.

Through it all, the large, tight-knit family supported each other with camaraderie and shared memories of Kiran.