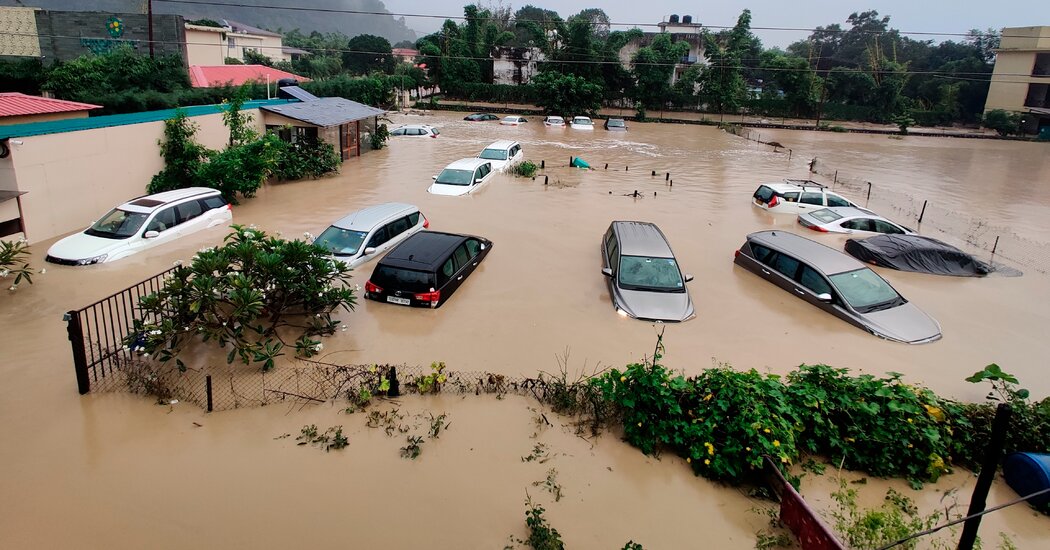 NEW DELHI – Unusually heavy rains have destroyed crops, washed away bridges and killed dozens of people across India and Nepal, reminiscent of the devastation caused by climate change.

The death toll continued to rise on Wednesday as landslides and flooding damaged homes and stranded thousands of tourists flocking to vacation spots and pilgrimage sites during Hinduism’s holiday season, which coincides with the fall harvest.

“Historically, October is the onset of the post-monsoon,” said RK Jenamani, senior scientist at the Indian Meteorological Department. “But this time, what happened was that the Western disturbances were very, very intense.”

Cyclonic conditions in the Bay of Bengal off the east coast of India sent strong winds and rainfall across the subcontinent, reaching the Himalayas in Nepal and spreading to the coastal ravines of the peninsula. southwest India.

In northern India’s Uttarakhand state, days of heavy rain – in one location, the most since 1897 – have killed at least 46 people and left hundreds stranded at beach resorts , with inundated lakes flooding the roads.

The South Asian monsoons have always arrived with fury. But the scenes of death and destruction unfolding in the region still serve as a reminder of the urgency of climate change, experts say. Global warming will result in more frequent extreme precipitation in many parts of the world, the scientists said.

India and its neighbors have struggled to put in place development projects aimed at lifting millions of people out of poverty at the risk of climate change.

Highways and bridges have been built in remote areas increasingly prone to landslides and flooding. And countries, especially India, rely heavily on coal to fuel growth, which is expected to be in the spotlight at the UN climate conference COP26 in Glasgow this month.

Governments in South Asia should push rich countries to get financial aid to help them move away from fossil fuels and switch to cleaner sources of energy.

This change – if it occurs – could take years, delaying not only international commitments to reduce global carbon emissions, but also plans to mitigate the effects of a less predictable and more dangerous climate.

Meteorologists weren’t expecting the catastrophic rains that have flooded India and Nepal in recent days.

Around 100 people were evacuated from a Lemon Tree complex in Nainital, a former British colonial hill station in Uttarakhand. Hotel management staff stayed on to care for the elderly, after rescuers decided an evacuation might be too risky for them given the hairpin bends and steep drops on the narrow district mountain road.

“The water is receding now, but the vehicles are still stuck,” said Akriti Arora, a spokesperson for the company.

A couple sailed through the flooded streets of their village in an aluminum pot to get to their wedding.

More than 40 people in Kerala have drowned or been killed in recent landslides and floods, said Neethu V. Thomas, risk analyst at the Kerala Disaster Management Agency.

“All the forces are on the ground,” she said.

Yet the forecast of yet another episode of heavy rainfall in the coming days complicated a full assessment. “It’s hard to get all the details,” she said.

This week, officials in Kerala opened overflowing dams, the first time state officials have taken such a step since catastrophic flooding killed more than 400 people in 2018.

India has deployed Navy and Air Force personnel to assist with rescue efforts and force people living on the way downstream from the dam to evacuate.

Landslides and flooding also hit Nepal this week, killing at least 50 people in remote villages flooded. Hundreds of houses in hilly areas were washed away. Highways have been blocked, and a regional airport, its tarmac submerged, has been forced to cancel flights.

There, too, the showers surprised scientists, who had predicted that the Himalayan nation’s period of heavy rains was over more than a week ago.

The rice field ready for harvest was damaged by the rain, causing despair among Nepalese farmers and raising fears of a food crisis in one of the poorest countries in the world.

“Rainfall in October has also been reported in the past, but not at this intensity,” said Ajaya Dixit, climate change vulnerability expert in Nepal. “Climate change is real and it is happening. “