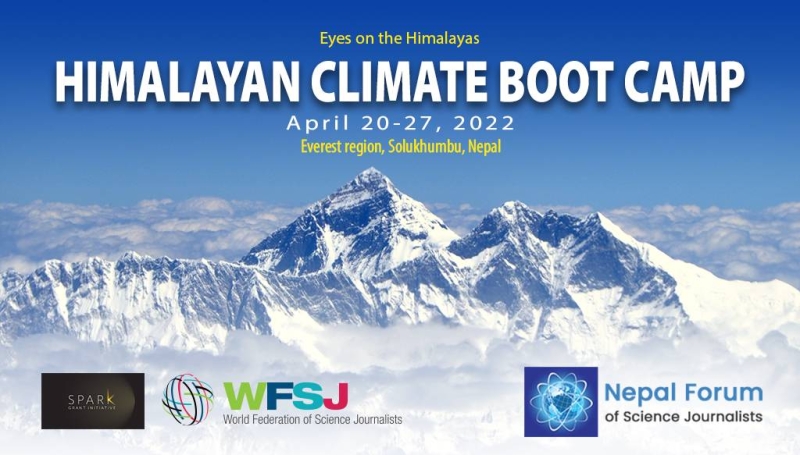 Eight environmental journalists from Nepal, India and Bangladesh will be part of an expedition to the Everest region to participate in a climate change boot camp that will enable nuanced science reporting in a field difficult and underestimated.

The journalists – four from Nepal and two from India and Bangladesh – were chosen through a competitive call for applications launched by the Nepal Forum for Science Journalists (NFSJ).

Science journalist Chhatra Karki, the training camp team leader, says the geographical remoteness of the Everest region and lack of resources in newsrooms have hampered on-the-ground reporting on the impact of climate change in the Himalayas, including the delicate Everest region. “The boot camp – to our knowledge the first of its kind – aims to enable journalists in the region to literally scale these peaks to report untold stories.”

The difficult terrain also hampers scientific research in the region, resulting in a scanty primary literature. This meager but critical climate science research remains largely buried in technical manuscripts published in scientific journals due to lack of popular communication by the scientific community or journalists’ limited understanding of science jargon. “The boot camp will be a great opportunity for participating journalists to include nuanced evidence in their reporting – both from the field and from the ongoing scientific investigation in the region,” said Priyadarshini, also founding president of Association of Science Journalists of India. (SJAI).

“This project is very interesting because, while being original, it comes from a region that is sometimes forgotten when talking about the needs of science journalism,” says Olivier Dessibourg, president of the WFSJ’s Spark Grant Initiative and president of its jury.

Climate change-induced snowmelt, glacial lake outbursts and unseasonal flooding, man-made emissions, and low energy and water availability affect the lives of residents not only in Nepal, but also throughout the Himalayan region of Hind Kush which spans eight countries.

This inaugural training camp will focus on the three countries of the Koshi River Basin – Nepal, India and Bangladesh, according to the statement released by the training camp.

During the week-long intensive boot camp, journalists will have the opportunity to talk about common climate change issues facing Asia and possibly forge reporting collaborations. The camp will facilitate open interactions between participants, trainers, scientists, academics, NGOs and policy makers to create an atmosphere of experiential learning and critical thinking, the results of which will hopefully continue to be observed long after the end of the camp. In-depth field reports from the Everest region will provide better information for governments and policy makers to formulate evidence-based climate policies, the statement added.