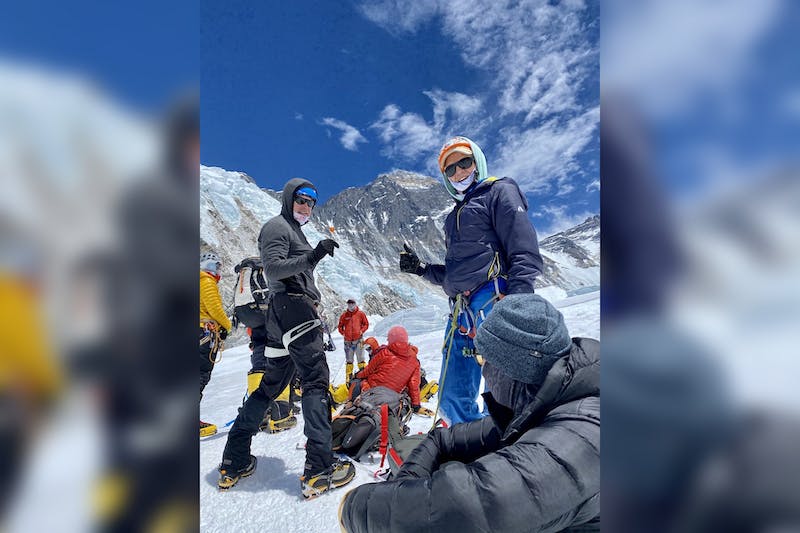 Arthur Muir, who graduated from college in 1968 and graduated from Wharton in 1972, became the oldest American to summit Mount Everest when he completed the three-month expedition in May.

The 75-year-old retired corporate finance lawyer from Northbrook, Ill. Broke Bill Burke’s record as the oldest American to ever reach Everest when he completed his peaked in 2014 at the age of 72. the third oldest climber of all countries to reach the world’s highest peak.

While Muir was aware that he would break the record for the oldest American to climb Everest if he was able to reach the top, he thought no one would care.

“The real story here isn’t about me, but how you can do some really amazing things even when you’re old,” he said. “You can do a lot of things, if you just have a dream, make a plan and work on it. ”

Muir’s accomplishments have captured media attention across the country, and his story has been featured on shows such as the TODAY Show. Penn President Amy Gutmann also praised Muir for the feat on June 14 in a post on Instagram.

“Kudos to Penn’s alumnus Arthur Muir, C68, WG72, who recently became the oldest American to climb Mount Everest at the age of 75,” Gutmann wrote. “His determination and courage are all the more extraordinary since he only started mountaineering at the age of 68.”

Muir grew up in Aurora, Colorado – where he first felt the lure of the mountains – and said he only climbed a few mountains in high school and college, including a handful of peaks 14,000 feet high. He was not a varsity athlete at Penn and described himself as an “ordinary guy”.

He graduated from college in 1968 and, after three years in the military, enrolled at Wharton, earning an MBA in 1972. As an undergraduate student, Muir was a member of the Phi Delta Theta fraternity in which he befriended with whom he is still in touch, he said.

Muir didn’t officially start mountaineering until he was 68. Muir said when he started climbing he expected people to underestimate him because of his age or ask him questions such as “Can you walk?” “And” Do you need a crutch? But said he found just the opposite.

“When I spend 60 days with people, you know I don’t have a mirror so I can’t see what I look like. I feel like I’m 55 because I can’t see, ”Muir told ABC Chicago. “Then at the end, I look at myself in the mirror and say, ‘Oh yeah, you’re 75.’ But you forget when you’re with people who do all that. ”

Since starting mountaineering, Muir has scaled volcanoes outside of Quito, Ecuador, climbed Denali in Alaska – the highest peak in North America – and even skied Mount Elbrus – the most high mountain in Europe.

Muir has been training to climb Everest for more than two years after previously attempting to reach the summit in 2019. Muir was forced to stop early in his trip due to a sprained ankle afterwards. having fallen from a ladder.

“I wasn’t ready,” he says. “Physically, I was not ready; mentally, I made mistakes.

Muir started training with Uphill Athlete – a service that connects professional coaches with people training to climb mountains – after his first attempt at the end of 2019. Uphill Athlete coach Seth Keena-Levin said of Muir’s first attempt on the Everest that Muir was not physically ready to climb Everest when he started working with him.

After years of daily training with the Uphill Athlete team, hours on an old NordicTrack machine, and workouts in his garage during COVID-19 lockdown, Muir felt ready to try again in 2021. Keena-Levin said he knew Muir was ready this time around when he saw how much hard work Muir could do during their workouts as well as Muir’s ski trips and hikes. local.

After receiving his COVID-19 vaccine this spring, Muir flew to Nepal and began his journey on March 23. The ascent and descent of the summit lasted 12 days in total, and his group of climbers reached the summit on May 23.

Garrett Expedition Leader and Expert Mountaineer Madison led the group consisting of Muir and at least 18 other climbers, including researchers, a dentist and a former NFL player. Madison said he admires Muir’s thoughtfulness and care for the climbing team and the mountaineering community. Muir has dedicated Instagram posts to each of the climbers on his team as well as support staff.

“I really like staying in touch with people,” Muir said. “It’s a bit like a cult. A good sect, in a way.

Due to Everest’s difficult terrain, mountaineering expeditions typically rely on the help of the Sherpa people, indigenous to the Himalayan mountains, to guide and navigate them through the rugged environment. Muir congratulated the team’s Sherpa guides, Pasang and Dawa Bhote, for their help in reaching the summit.

Receive our newsletter, Dear Penn, delivered to your inbox every morning of the week.

“I can’t tell you how valuable Pasang has been to my success. I never would have done it without his help,” Muir wrote on Instagram. “He’s the person who should be on the news with all the other Sherpas who make these climbs possible.”

Madison praised the 75-year-old for his athletic achievement, saying Muir had impressed him with his courage and strength during the expedition.

“[Muir’s] strength is a combination of mental, physical and emotional strength, ”Madison said. “He was certainly one of the strongest members in all three areas on our trip.”