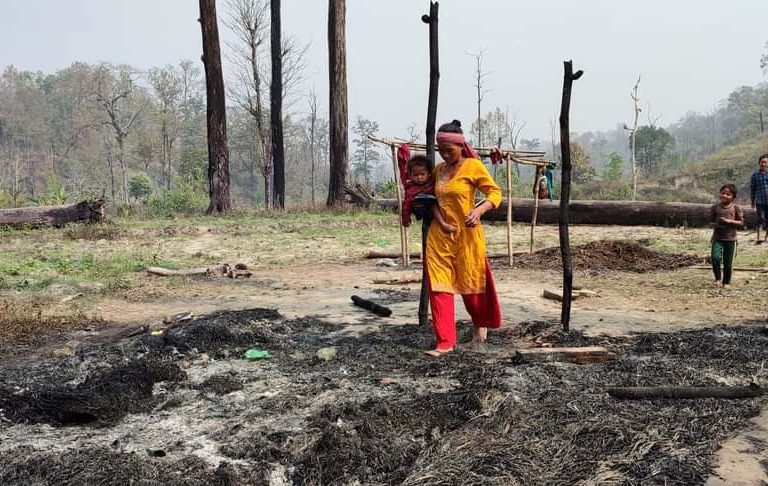 KATHMANDU – On the evening of March 27, as residents of the Kusum Khola settlement on the edge of Nepal’s Chitwan National Park were preparing dinner, they heard footsteps crushing fallen leaves, disturbing the quiet of the night.

As the footsteps got closer, locals realized they were under attack – not by the park’s world-famous rhinos or tigers, but by park officials, backed by soldiers. Officers ordered people to leave the area and set fire to their huts. The reason? Their community was encroaching on land belonging to the park.

“About 100 members of the Chepang community living in about 20 huts were displaced that night,” said former parliamentarian Gobinda Ram Chepang of the opposition party CPN-UML.

“Officials didn’t even allow them to put their vital documents and clothes in a safe place,” said Gobinda Ram, who is a member of another indigenous Chepang community in nearby Makwanpur district. He spoke following a visit to the Kusum Khola site after the incident was widely reported in the media.

This is the second time in three years that authorities have razed indigenous settlements in Kusum Khola on the grounds that they were illegal. In 2021, authorities burned down two houses and destroyed eight others. They also used trained elephants to hunt Chepang families.

The incident sparked an international outcry, with human rights organizations condemning the government’s actions. This was followed by a Supreme Court order ordering the government to end violent evictions.

“But that doesn’t seem to have deterred the government,” said Gyan Basnet, a researcher in international human rights and constitutional law and an attorney at Nepal’s Supreme Court.

“The state must protect, realize and promote human rights. He should not use violence against his own people,” he added. “As a party to seven of the UN’s nine fundamental human rights principles [instruments] and the [International Labour Organization’s] Indigenous and Tribal Peoples Convention, government should provide alternative housing for Chepang [people] before asking them to leave a place where they should not live.

Members of indigenous communities, including the Chepang, Bote and Majhi peoples, were first evicted from their homes in this region of Nepal to make way for Chitwan National Park when it was established in 1973. Park authorities, supported by the Nepalese army, have since banned indigenous communities from practicing their traditional livelihoods such as fishing, foraging and cutting trees for firewood and timber.

Park officials say these restrictions have helped them control the poaching of endangered and iconic wildlife such as tigers and rhinos. The latest census shows the population of greater one-horned rhinos in Nepal (Rhinoceros unicornis) has increased by 107 in four protected areas since 2015. The country, which shares borders with China and India – major markets for illicit wildlife products globally – has received international praise for its efforts to conservation.

The indigenous people who once resided in the park had to find other means of subsistence, such as running host families for tourists and providing services such as home repairs and driving.

“We Chepangs have suffered particularly from living next to protected areas,” said Gobinda Ram. Plagued by poverty and hundreds of years of marginalization due to neglectful state policies, their culture and language would also be under threat.

A few months ago, the local municipality built a separate settlement near the park for the Chepang families, most of whom had been affected by the floods. Each family has been allocated a two-room hut in the buffer zone of the park, where neither agricultural activities nor the felling of trees are permitted. The new settlement was inaugurated by former Prime Minister Pushpa Kamal Dahal just three days before the March 27 incident in Kusum Khola. Dahal, better known as Prachanda, had led Nepal’s Maoist insurgency for a decade, whose stated aim until its end in 2004 was to fight for the oppressed and downtrodden. A total of 41 households have been settled in the settlement, which is in the parliamentary constituency of Dahal.

However, Chepang leaders say this government-provided housing does not solve their problems.

“The first thing is that it’s not enough for every household,” Gobinda Ram said. “The second…what about our livelihoods and sustenance? We are denied access to the forests, our traditional source of livelihood because they are now within the protected area. So what do we eat and what fuel do we use to cook? »

He added that the community had no choice but to return to Kusum Khola.

Government officials, however, say the Chepang have access to alternative livelihoods such as tourism to help them earn a decent living. Instead, they claim, people are trying to claim ownership of land belonging to the park.

The issue of land ownership has always been contentious in Nepal, where productive land has long been concentrated in the hands of a few. Several policies such as caps on land ownership and tenancy rights were populist measures adopted by the government.

Two years ago, the government formed an agrarian reform commission to look into the matter. The commission called on landless people occupying land that does not belong to them to register and possibly claim ownership of the land based on their current tenure. This is why the Chepang are returning to Kusum Khola, according to government officials.

“According to our report, members of 160 households were [previously] living in the area for several decades. But all but one household have been resettled elsewhere,” Ganesh Prasad Tiwari, information officer at Chitwan National Park, told Mongabay by phone. “We saw new huts being built in the area even after we warned them not to. We had no choice but to order them to leave. However, we took no action against the one household that had not yet been relocated.

Gobinda Ram, however, denied the allegation. “The Chepang have nowhere to go to find food for themselves, but officials don’t understand that,” he said.

The evicted Chepang announced that they would hold protest rallies and marches demanding that they be provided with land to grow food.

Ecologist Kumar Paudel of the NGO Greenhood Nepal said this particular case should not be seen in isolation.

“Government officials say they evicted people who were encroaching on [the] park lands and they have a duty to do so,” he said. “However, if we look at a larger time scale, we will understand how the relationship between indigenous peoples and the forest has been severed for conservation.

“Incidents like these show that making conservation inclusive is a challenge for the model we have adopted.”

Banner image: A Chepang woman scours the ruins of her hut for valuables after authorities set fire to the settlement. Image courtesy of Gobinda Ram Chepang

Feedback: Use this form to send a message to the author of this message. If you want to post a public comment, you can do so at the bottom of the page.